How do you create a successful Facebook ad campaign? Columnist Khalid Saleh offers four conversion tips to help you increase leads and get the most out of Facebook. With 1.09 billion users, Facebook is an advertiser’s dream come true. But this immense reach also brings with it a lot of challenges. As click-through rates drop and competition increases, it’s more important than ever to run a conversion-focused Facebook ad campaign.

1. Run broad tests before zeroing in on an audience set

Facebook’s targeting capabilities are its biggest strength. You can zoom in and target cat lovers who like Kanye West and live within a 10-mile radius of San Francisco.

When you’re starting a new ad campaign, however, such detailed targeting can backfire. You might very well end up testing far too many demographics and not find anything that actually converts.

A much better option is to start with a broad audience set, then narrow it down based on results.

For example, if you were selling shoes, you’d start off by selecting a very broad audience based on generic interests. This could be “women who live in California and like running.” After running this test for a while, Facebook would tell you what demographic is responding best to your ads. For example, if the data shows that college-educated women between 25 and 30 years old respond more to your offer, you can launch another campaign targeting this demographic.

Your landing page is the foundation of your Facebook campaign. Poor conversions here will wreck your overall campaign performance.

Instead of reinventing the wheel, start by following tried and true best practices like these:

This is the base of your landing page. While it might work, it won’t help you maximize conversions.

For this, you need to create page variations and run A/B tests. Try some of these tactics:

Facebook is constantly revamping its ad platform to better serve advertisers’ needs. Besides the standard “Clicks to Website” and “Post Engagement” ads, there are a number of newer ad formats for you to work with. 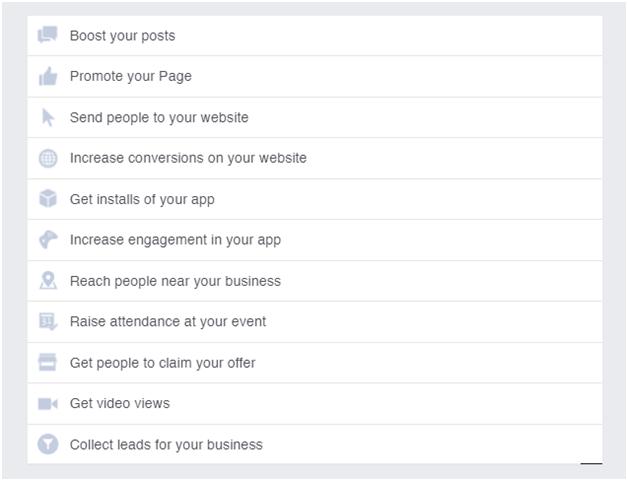 The image carousel, for example, works great when you want to show multiple products to your customers: Facebook also introduced “Lead Ads” earlier this year. These help businesses capture leads from within Facebook. Your audience can fill out a form and get your offer without even leaving the site. Larger ads are more visible in the feed. Since not many advertisers don’t know about this change, you can often get strong engagement with low ad spend.

Then, of course, there’s the “Increase Conversions on Your Website” ad. You can use this to better track your conversions from within Facebook.

4. Use “overlap targeting” to increase conversions

“Overlap targeting” (or “And-or/Narrow/Flex” targeting — depending on whom you ask) is a recent Facebook feature that allows you to narrow down your audience by using And/Or rules.

Here’s an image from Facebook that best explains overlap targeting: Essentially, it involves defining two audiences and only selecting people who fit into both audience groups.

For example, suppose you want an ad set where you only want to target women who like Bon Jovi AND Pearl Jam.

If you only select “Bon Jovi,” you’d get too broad an audience: Using the AND rule to select women who like both Bon Jovi and Pearl Jam, however, gives you a narrower audience:

This form of selection is additive. You can also do the opposite and use subtractive selection to remove overlapping audiences.

For example, if you wanted to target people who like Pearl Jam but don’t like Bon Jovi, this is what you’d do:

Consider an example: Let’s say you want to target people who love kayaking.

Targeting only people who’ve liked the default Facebook page for kayaking isn’t very useful. A lot of people might have liked this page without actually caring much for kayaking as an activity.

However, if someone has liked dozens of pages about kayaks, there is a good chance this person really cares about kayaking.

You can select all such pages in Facebook to create a highly targeted audience group of true kayaking enthusiasts:

As you can see, this is a powerful feature for creating high-converting Facebook ads.

Creating a successful Facebook ad campaign is not easy. Between your targeting and your choice of creatives, there are a lot of things that can go wrong. But by following a few simple tips, you can create a system that will work for nearly any niche.

Here’s what you can take away from this post:

Khalid Saleh
Khalid Saleh is the CEO and cofounder of Invesp, a leading provider of conversion optimization software and services. In 2016, he is gearing up to launch his technology startup Figpii, a one-stop platform for everything related to conversion rate optimization. A recognized expert of marketing strategy, he has presented at marketing conferences across the globe. Khalid has been a frequent guest in key media .outlets, including CNN, BBC, SKY, France 24, MSNBC, New York Times, National Public Radio, and more.