Google Stands In For “The Emerald City” In The Internship Movie

There’s a scene near the climax of the film The Internship, starring Vince Vaughn and Owen Wilson (opening June 7), where they and their team of Google summer interns try to sell a local pizza restaurant on Google advertising (presumably AdWords). Many of the different Google tools and services are paraded out (i.e., search, Google […] 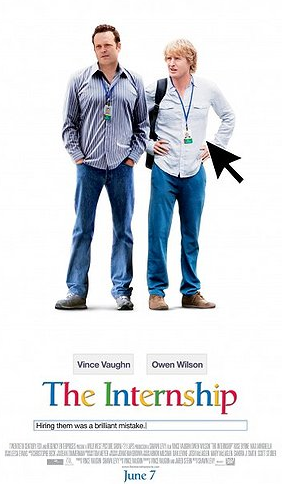 There’s a scene near the climax of the film The Internship, starring Vince Vaughn and Owen Wilson (opening June 7), where they and their team of Google summer interns try to sell a local pizza restaurant on Google advertising (presumably AdWords).

Many of the different Google tools and services are paraded out (i.e., search, Google Maps, Google Trends/Insights), while veteran sales guy Vaughn tells the restaurant owner that he, too, was once afraid of change.

The scene could be cut out of the move and used as “sales collateral” in Google’s effort to bring small businesses into the AdWords fold.

That scene and others will seem like evidence of Google’s deep creative involvement and heavy hand in the making of the film. But rather than micromanaging the production, Google really just cooperated and “got lucky” with the outcome.

The film has been called a 120 minute “commercial for Google.” Danny Sullivan’s take on the film is similar: The Internship: A Fun Movie, But Also A Beautiful Google Commercial.

Other members of the press and tech bloggers who have seen the movie have said similar things. And even though most reporters find things to enjoy about the movie — it’s far from great; but, many scenes are entertaining — there’s a sense of cynicism about Google’s role and motivations.

Even though Google is prominently featured throughout — the film is in some ways about Google and its culture — Google is intended to be merely a sexy backdrop for a story about older workers (Vaughn, Wilson) trying to change their lives and the challenges of the new economy. Google didn’t come up with the film idea; Vaughn brought the story to director Shawn Levy and to Google. At the San Francisco screening last night, Vaughn was asked, “why Google?” and not another major tech company (such as Facebook, though Facebook wasn’t mentioned specifically). Vaughn said that Google was always in his mind partly because of its unconventional work environment and its storied culture. Levy said that Google had a kind of “mystique” that was also appealing to the filmmakers and writers.

Levy referred to Google during the audience Q&A session as the “Emerald City” for the Vaughn and Wilson characters. The first act, where they lose their original jobs, is shot in very drab, muted colors. Once they get to Google it’s like Dorothy opening the door to OZ and the film going from black and white to full color.

The Social Network is a dark film about manipulation, greed and betrayal; whereas, The Internship is a feel-good movie about overcoming obstacles and generational differences. The positive, “aspirational” nature of The Internship is partly what convinced Google to cooperate with the film, most of which was shot on the Georgia Tech campus (made to look like Google). However, the crew was on location at Google’s Mountain View campus for five days during production.

At Google I/O, CEO Larry Page said that Google participated in the film because it wanted to help change the image of computer scientists. Said Page, “The reason we got involved is because computer science has a marketing problem . . . in this movie the guy who plays the head of search . . . is by far the coolest character in the movie.”

Google apparently did read the script, but took a largely hands off approach. The company was told that the film might be rated PG-13 or R (it’s coming out as PG-13). But Levy and his team were given near-complete creative freedom, according to their account of the process. The Wall Street Journal reports; however, that a crash scene with one of Google’s self-driving cars was cut at Google’s request:

Executives were allowed to read the screenplay and to see the film’s final cut, and they made comments. For instance, when filmmakers wanted to introduce a scene in which Google’s self-driving car gets into a wreck, Google objected and the crash was cut.

The self-driving car still does appear early in the second act of the film as a kind of metaphor for the strange and futuristic world of Google. Another logical product to make the same point, Google Glass, does not appear in the movie. But, there are plenty of Android tablets that appear, as well as a Motorola handset, which I missed. There are also iPads, Macbooks and iPhones in the movie. Google co-founder Sergey Brin appears in cameos twice in the film. None of Google’s rivals are directly mentioned (e.g., Facebook, Apple, Microsoft), though one of the central characters mentions that Instagram was bought for “like a billion dollars — with a B” (no discussion of by whom). Foursquare is also given a shout out in passing toward the end of the movie.

I have been looking for the script online and haven’t been able to find it. So, I don’t know how many of these product references were in the original script and how many were added during production.

By the time the final credits roll, which is an entertaining sequence featuring Gmail and Google Docs, the two lead characters have been redeemed and Google has been thoroughly showcased as a great, even inspiring place to work. Again, to those inclined to see conspiracies, this will seem like evidence that Google had more control and influence than the filmmakers say it actually did. (There were no payments either way.)

When Vaughn and Levy approached Google, I think what happened was that the company saw an opportunity to present both computer science and itself in a positive light in a piece of mainstream, popular entertainment.

In the end I don’t think this helps Google with its regulatory challenges or government relations or even recruiting. But, it does show off the company as a special and almost unique place  — not quite the Emerald City of OZ, but a friendly and fun world-of-plenty insulated from the gray and grim reality just outside its magical campus gates.

Other articles about the movie: