The new native Android messaging app and standard is the mobile platform’s answer to Facebook’s WhatsApp, Apple’s iMessage and the other increasingly capable messaging apps. 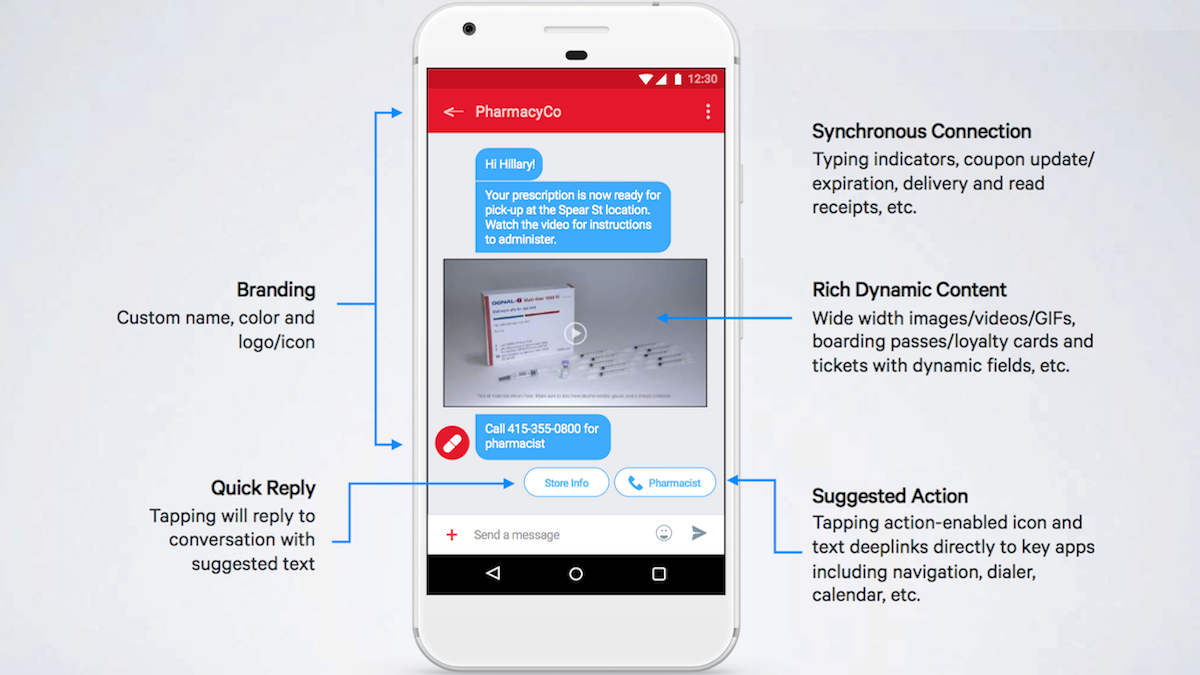 Waterfall’s visualization of RCS in action

SMS text messaging is undergoing a major renovation, with the announcement late last week of an expansion in the initiative by Google, carriers and manufacturers to launch a new standard, Rich Communications Services (RCS) for Android. The initiative itself was announced a year ago.

A new Android Messages application — which supports SMS and MMS, as well as RCS — will replace the current Android native messaging app, Messenger for Android.

It’s a direct response to the capabilities offered by such messaging apps as Facebook’s WhatsApp and Messenger, Apple’s iMessage, third-party products like Line and others. These offerings are quickly moving beyond messaging, becoming full-fledged communications platforms, and now Android has one built in.

Telecom supporters of the new standard include Sprint, Rogers, Orange, Deutsche Telekom and Vodafone. This backing by telecom companies, Google said, means the new standard starts with access by more than a billion subscribers. Additionally, over 20 device makers will provide Android Messages as the default messaging app, including LG, Motorola, Sony, HTC and Kyocera.

The Google post announcing the initiative summarizes the opportunities for brands:

RCS will upgrade today’s business messaging experience by enabling brands to send more useful and interactive messages. For example, a message from your airline reminding you to check in for a flight can now take advantage of rich media and interactivity to provide a full check-in experience, complete with boarding pass, visual flight updates, and terminal maps on demand, all directly within the messaging experience. Businesses can also have a branded messaging experience with information about the business and the ability to share content like images, video clips and gifs.

It demonstrated how “an airline could move check-in and seat assignments, into a conversational interface,” 3C said in an email to me. It has also developed a demo of a RCS program for Walgreens, which expands that retailer’s current SMS offerings with images, maps, location awareness, photo submissions and suggested responses. Here’s 3C’s visualization of a typical RCS screen:

Mobile marketing platform Waterfall is building self-service RCS tools for brands, Head of Strategy Matt Silk told me via email, allowing them to create, distribute and monitor campaigns. Here’s a screen shot of the tool: “With help from our partner CLX Communications,” he said, “brands can build campaigns and send them out to their subscriber base and our service recognizes what type of message will work best on each device, and [sends] the appropriate message from RCS to MMS to SMS.”

Use cases, he said, include the ability for users to check their bank balances and conduct transactions through suggested replies. And “hair salons or make-up brands can ask subscribers if they’re interested in scheduling an appointment and complete the entire process without having to leave the messaging app.”