This campaign year, what can email marketers learn from the “black arts” of political fundraising and voter recruitment? Columnist Steve Dille shows how the politicos have evolved their approach. Former Speaker of the House and veteran Boston politician Tip O’Neill famously said, “All politics is local.” Whether stumping for votes at the local union hall or country club or trudging door-to-door, every politician since Pericles has understood the importance of a hearty handshake and the chance to look the voter square in the eye.

Email may not provide quite as face-to-face an encounter as running into Bill Clinton at the neighborhood Mickey D’s, but there’s an unqualified personal intimacy to our inbox. No wonder political operatives burn the midnight oil dreaming up new ways to wriggle their way into it.

So, just as in other recent election years, the strategies and tactics they’re putting to use in 2016 offer fascinating comparisons — and useful insights — for the rest of us.

Regardless of any email marketer’s party affiliation (or lack of it) or opinion of President Barack Obama’s performance in office, they’ve got to admit how his two presidential campaigns made the most of the medium.

The approaches embraced by his team, and the engagement ROI they realized, were eye-openers for other campaign organizations and marketers alike.

One statistic that still jumps out: Obama’s 2012 campaign cost $690 million, a staggering kitty. What’s more impressive is how the majority of those dollars were raised through email.

Approximately 4.5 million people donated, with an average gift of $53. Toby Fallsgraff, who directed the 2012 email program, told MarketingSherpa, “You can do the math and figure out a lot of people gave more than once.”

It wasn’t solely because of their passion for the incumbent or their love of the process. Fallgraff’s team used an email model that was beautifully orchestrated and integrated:

2016: The other race… for digital dominance

In spite of the very visible upheaval in each party’s primary process in 2015–16, there hasn’t been any seismic shift in political email campaigning. There’s been evolution, but not revolution as campaigns embraced and refined the lessons of 2008 and 2012. 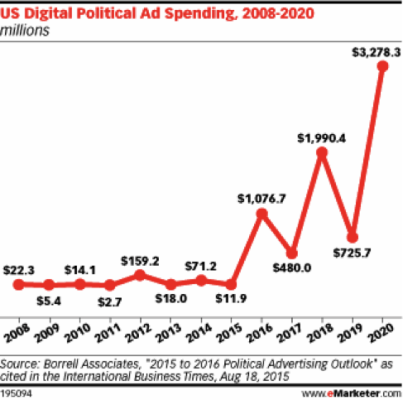 What, then, is the really major difference between 2008 and 2016? It’s got to be the sheer amount of money flowing into digital programs, including email.

In 2008, $22.3 million was spent on digital advertising and marketing. This year, it’ll reach the $1 billion mark — an increase of 5,000 percent over only two presidential election cycles.

Who’s earned the vote at the inbox?

In pursuing dollars and voters via email, the amount a candidate spends doesn’t always turn into success at the inbox.

Engagement, indicated by candidates’ read rates during the 2015–16 primary season, has proven that. Carly Fiorina — a well-funded candidate with, you’d think, access to top digital marketing talent — led the field, Democrat and Republican alike, with a read rate of 31 percent at one point.

But Bernie Sanders, with hardly the deepest pockets, held down the #2 position at 26 percent. Hillary Clinton came in third at 22 percent. Yet Jeb Bush, blessed with a huge war chest, saw a read rate of only seven percent. And many others, all of them now out of the race, did even worse.

Deliverability is revealing, too. Rand Paul, an enthusiast of direct mail and reputedly just as enamored of email, saw an appalling deliverability rate of 45 percent and an open rate of just 12 percent.

On the other end, Sanders probably started out with a smaller list than that of Paul or other candidates, but his deliverability rate was 96 percent. That attests to a quality database probably flush with those die-hard adherents who’ve been the cornerstone of his campaign.

They’re exactly the followers a candidate (or a brand) can depend on not only for dollars but also for viral forwarding, word-of-mouth, social influence and grassroots activism.

Spamming may seem like a habitual sin by politicians, but the majority of the messages piling up in the inbox usually result from an addressee’s opt-in to one list or another. According to analysts at Havas Helia, about 30 percent of Ted Cruz emails wound up in Gmail’s spam folder.

Our colleagues at Iterable recently compared the email efforts of the Clinton and Trump campaigns and found huge differences between the two.

Earlier, we noted how political marketing pros have bought into the email strategies that were so effective for Obama in the last two presidential elections. The Hillary Clinton email program exemplifies that, and even takes it a step (or three) further:

Some candidates, though, haven’t adopted the Obama template. Donald Trump’s campaign has shown a sparse, almost nonchalant approach to email, especially compared with other hopefuls:

The takeaways for email marketers?

Political campaigns have adopted many elements of commercial email marketing over the years, but they’ve also been innovators, making extraordinary strides in less than a decade.

They recognize the potential of email offers for forging authentic relationships between audiences and “brands” — whether it’s Brand Clinton, Brand Sanders or Brand Cruz. To make the most of that potential, they’ve employed flexibility, experimentation, persistent engagement and personalization.

So what are a few of the lessons the rest of us can find in how email is being applied during the current presidential scrum?