With an open mind and help from a Google staffer showing me how the device works, it was pretty easy to see some compelling use cases within the first hour that I was a Google Glass owner. On Monday, I visited Google’s Mountain View headquarters for my onboarding appointment with a Glass specialist. Marketing Land/Search […] 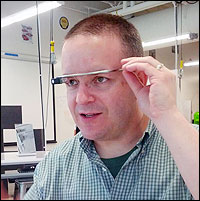 With an open mind and help from a Google staffer showing me how the device works, it was pretty easy to see some compelling use cases within the first hour that I was a Google Glass owner.

On Monday, I visited Google’s Mountain View headquarters for my onboarding appointment with a Glass specialist. Marketing Land/Search Engine Land Founding Editor Danny Sullivan was there, too, to help document the visit in photos and videos.

Much has been written about Google Glass in the three weeks or so since Google began inviting “Explorers” to get their devices — but a lot of it has focused on the tech aspects of Google Glass. This is the first in an occasional series of articles – diary entries, we’ll call them — where I’ll talk about my experience as a Google Glass user. No doubt I’ll address the tech aspects, but my goal will be to think about Google Glass in marketing terms with articles here on Marketing Land, and likely search-related thoughts on our sister site, Search Engine Land.

Getting Started With Google Glass

That was my reaction when the little screen lit up about an inch away from my right eye.

I’m glad I went down to Google rather than have the device shipped to me, because using Glass was not — for me, at least — immediately intuitive. Today, a full 24 hours later, I’m starting to do better. It requires a combination of taps and swipes and the occasional voice command, and even after I thought I was getting the hang of it, I occasionally found that Glass did something it wasn’t supposed to do … or maybe I gave it the wrong command.

I wore it for about an hour at Google, and have been wearing it most of the morning today in my home office. (Today’s wearing has been borderline pointless, though; it’s a mobile device and doesn’t really serve much purpose for someone sitting at a desk.)

Still, it’s as comfortable for me as wearing sunglasses and the device doesn’t get in the way of my normal line of sight.

Google Glass doesn’t require an Android phone/device to connect to, but it offers more features when you do — including the My Glass app that helps walk you through the setup process. There are a handful of apps available out of the box, including Google+, Gmail and Google Now. There’s also a barebones New York Times app (more on that in a moment) and a Path app. I don’t have a Path account, so I left that one off but turned on all the rest.

Photos and videos that I take with Glass can be shared to Google+, but only with circles that I’ve setup; there’s no option for “Public” sharing on Google+.

As Danny discovered yesterday, even after I shared a photo with him via Google+, he seemed unable to reshare it publicly beyond his circles. (He made a copy of the image, though, and could share that with the world.)

The Google+ app doesn’t let you browse/visit Google+ itself — the website. It’s there for sharing purposes only. Ditto with Gmail and the New York Times app. Glass isn’t a web browser. You don’t say “Take me to plus.google.com” or gmail.com. (It occurs to me that I may be using the wrong terminology, too. It may not be an actual Google+ “app” that I’m using; it might just be a tool that opens up a connection so I can share from Glass to my Google+ circles.)

Still, it does have very simple integration with the Hangout feature of Google+ and “Hang out with…” is one of the voice-command options available via the “ok glass” voice prompt. I can see this having potential customer service benefits in the future; picture a Glass-wearing tech support person showing a customer exactly how to setup or repair something via a hands-free Hangout.

As I said above, apps aren’t like what you’re familiar with on smartphones and tablets. On Glass, you don’t actually visit the New York Times website when you install and use the app.

Instead, apps push content to Glass and that content shows up on what Google calls “cards.” In the case of the Times, a card looks like this: This card is telling me that, just about an hour ago, the Times sent out three new stories. The white triangle in the upper right corner is a common design element across Glass, and tells me that I can tap to see everything included in this card; in this case, I’d tap to see those three updates, each of which gets its own card (or “sub-card” if you prefer).

The Times sends out updates once an hour and each update shows up as a separate card. The app also promises to push updates related to breaking news, but I’ve yet to see one of those in my short time with Glass.

Here’s the important thing for publishers: Google Glass isn’t a good venue for reading long pieces of content. The screen doesn’t show enough text; with a long article, you’d be swiping a hundred times to get to the end.

So what the Times does, instead — and what I imagine others will do (maybe Google’s rules force them to do this?) — is it lets you tap to have a short article summary read aloud. I just did that for the Times’ article about Ray Harryhausen’s death. The computer-generated voice read a one-sentence summary that lasted about 11 seconds.

This will no doubt prove challenging to brands that deal in content. User interaction with Google Glass is very ephemeral; the device is designed to get quick bits of info to the wearer and then get out of the way.

I have some travel coming up soon, and I’ll be bringing Glass with me since that’s really the primary use case — doing things on the go.

For now, I see some potential for Google Glass as a user while recognizing that I have the absolute earliest version of a device that’s going to change dramatically in the near future. My Google guide yesterday emphasized that the company wants lots of feedback from me and the other Explorers as we test Glass in real world situations. There’s a special online forum/community where I can ask questions, offer suggestions and put in feature requests. I plan to do so. (For starters, volume control is a must; it was awkward to have to to cover my ear in order to hear Danny during our brief Hangout yesterday.)

I also see some obvious impacts that the device could have on marketing and brands — particularly when it comes to mobile visibility, local deals/shopping and things like that. And there are obvious search implications that I’ll write about soon on Search Engine Land. These “diary” articles won’t be published every day, but stay tuned for more in the days and weeks ahead. I’ll do my best to answer any serious questions in the comments below (and on future articles).