I received a text the other day from the CEO of a leading U.S. advertising agency asking me a simple question: “Peter, can you send me proof points for why digital advertising works for brand marketers?” It turns out that she was in an annual review session with senior members of her consumer packaged goods (CPG) […]

I received a text the other day from the CEO of a leading U.S. advertising agency asking me a simple question: “Peter, can you send me proof points for why digital advertising works for brand marketers?”

It turns out that she was in an annual review session with senior members of her consumer packaged goods (CPG) client, including those delightful folks from procurement, and one had asked, “Does digital advertising really work for brand advertisers?”

I was at first taken aback by this question; of course digital builds brands. Why else would the world’s leading CPG companies be investing so heavily?

Unilever increased its digital advertising spending by 40 percent last year, allocating about 35 percent of its U.S. budget to digital, while Procter & Gamble spends a third of its U.S. advertising budget on digital media.

After my initial shock, I set myself to the task of providing definitive proof to my friend. I am summarizing the proof points herewith, to aid all those who find themselves similarly questioned.

Nielsen completed more than 800 studies over the past seven years, collaborating with more than 300 CPG brands and 80 companies to measure the correlation between online advertising and offline consumer purchases.

Nielsen concluded that brands can experience a return of almost three dollars in incremental sales for every dollar spent in online advertising that has been precisely delivered using purchase-based information. An econometrics study [PDF] conducted by BrandScience and Microsoft shows that online advertising not only delivers excellent ROI efficiency itself, but it also makes other media spend work harder.

When the researchers compared the difference in ROI performance between studies that have an online element and those that do not, the results were striking — adding online to the media mix has a positive impact on the campaign ROI for all media, from a delta of +4% for radio to +51% for outdoor and a whopping +70% for television. 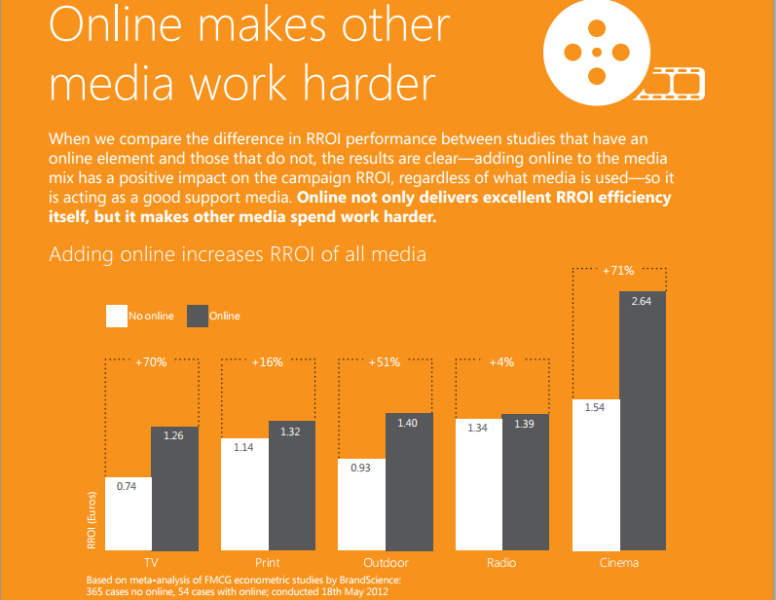 3. Digital Advertising Is Effective Across The Entire Customer Journey

Not only did they find that digital is key to driving premium perception (second only to live experiences), they discovered that digital channels dominate the path-to-purchase (in this case, McKinsey’s automotive “consumer decision journey” [CDJ] framework).

With traditional media, brands were constrained in their ability to influence prospects across the entire journey and to do so in a granular, discrete manner. Not so with digital media.

According to Nielsen, 92% of consumers believe recommendations from friends and family (“word of mouth”) over all forms of advertising, and there is little doubt that digital advertising turbo-charges this effective persuasion channel.

ShareThis has a unique view of the word of mouth phenomenon; its ubiquitous sharing tools allow it to touch the lives of 95% of U.S. internet users across more than 2 million publisher sites and 120+ social media channels.

In its quantitative study, “Return on a Share, Quantifying the Monetary Value of Social Sharing,” it found:

It is well known that the quality of ad creative is the most important determinant of ad effectiveness. A seminal comScore ARS study showed that creative quality drives more than half of the sales changes for brands analyzed, four times higher than the impact of the specific media plan.

Digital creative adds the dimension of interaction to sight, sound, and motion — and greater interaction has been shown to drive brand effectiveness.

For example, IAB, comScore, and Vibrant Media partnered to study the effectiveness of mobile advertising for Oreo, Hellman’s, and Microsoft Windows Phone. Standard banners were compared to the IAB Rising Stars, which include interaction. While it is dangerous to generalize about media costs given the wide array of choices within each medium, digital advertising can generally be seen to be among the most efficient means of reaching an audience.

Further, on a cost-per-conversion basis, the IAB estimates digital to be five to six times more efficient than direct mail. 7. Digital Advertising Is Essential To Reaching An Audience

U.S. adults are estimated to spend 4 hours, 28 minutes per day in front of their TV. Combining online and mobile devices, however, U.S. adults are expected to spend 5 hours, 46 minutes with digital media daily this year, increasing digital’s lead over television to well over one hour per day. 8. Digital Advertising Is Even More Effective Than We Know

It is highly likely that the tools used to measure return on investment for media today undervalue digital media. A consortium consisting mainly of leading CPG companies undertook a study together with Nielsen to better understand media attribution. Digital advertising is proving its worth to brand marketers every day by creating new desire and demand, increasing engagement and loyalty, and ringing the cash register. Despite this, skeptics remain, like my CEO friend’s procurement department audience.

The data is in: digital advertising really does work for brand marketers. The industry is not resting on its laurels, however, and smart marketers, agencies, and publishers continue to create and study effectiveness proof points—while also relentlessly raising the bar and making the case even more airtight.