The World Cup is one of the most popular events in the world, far surpassing the popularity of the Super Bowl, with millions of fans tuning in throughout the month-long tournament. Soccer (football, to most) fans have already begun turning to Google for World Cup information, and search volume will continue to surge once play […] The World Cup is one of the most popular events in the world, far surpassing the popularity of the Super Bowl, with millions of fans tuning in throughout the month-long tournament.

Soccer (football, to most) fans have already begun turning to Google for World Cup information, and search volume will continue to surge once play gets underway on June 12. Ironically, in what would seem to be a boon for the ad-driven search engine, the large percentage of “World Cup” results on Google.com will show no ads at all.

Google’s Keyword Tool in AdWords hints at the revenue potential for the search engine on a keyword like “World Cup 2014,” climbing to some 1 million searches in April. So why would Google forgo income from thousands of ad clicks?

Trademark protection. After finding itself in several legal disputes brought by trademark holders, Google has adopted a fairly generous stance on protection for brands.

FIFA, the organization that runs the World Cup™ every four years, has trademark and intellectual property protection on a handful of World Cup-related terms. Even the seemingly generic phrase “Brazil 2014” is included in that list. (Likewise, the Olympic Committee claimed “Sochi 2014” for last winter’s Olympics.)

Google’s trademark protection policy prohibits advertisers from using third-party trademarks in ad copy, but does allow advertisers to bid on others’ trademarks as keywords in their campaigns.

For example, per the policy, a company advertising travel packages for the World Cup should be able to bid on the keyword “World Cup 2014” and show an ad to soccer fans that doesn’t actually mention “World Cup” in the ad copy. But, typically, that’s not what’s happening. More often than not, Google is preventing ads from appearing at all on searches for these trademarked terms.

Instead of ads, users will most likely see what Google calls the OneBox, which in the case of the World Cup, displays key scheduling and results information for the games at the top of the search engine results page. The OneBox for the World Cup is even branded with the “FIFA World Cup Brazil” logo.

There are some exceptions. FIFA itself can advertise on its own trademarked terms, of course, and it can grant permission to the official World Cup sponsors and its affiliates. And, on rare occasion, another advertiser may sneak through. BrandVerity, which tracks usage on trademarked terms for brands, caught some of these rare examples.

In this screenshot, Soccer.com is advertising official World Cup gear in the top spot. The second ad is placed by Degree, the Official Deodorant of U.S. Soccer and the third, interestingly, is from subscription-based content aggregator OwnZone, which launched its World Cup coverage a few days ago. 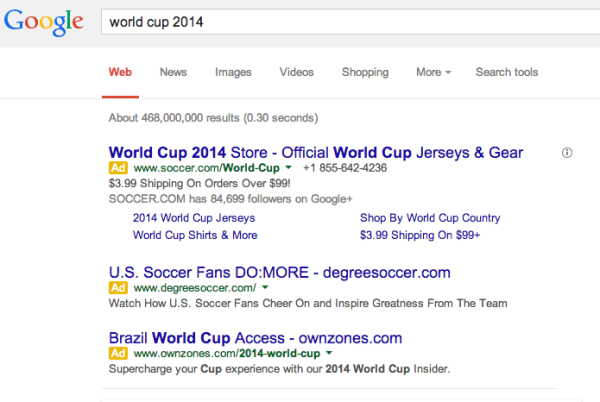 BrandVerity also captured ads from World Cup sponsors Budweiser and EA Sports as well as Major League Soccer and FIFA itself. For the most part, however, these types of searches will turn up ad-free. And the protections appear to extend beyond specifically trademarked terms to phrases such as “what time does the world cup start” and “world soccer tournament”.

Where the fence falls is on searches with specific consumer intent like “world cup gear” and “world cup tickets”. FIFA of course benefits from licensing deals for “Official World Cup” jerseys, balls as well as all ticket sales, so it’s no wonder advertising is allowed to proliferate on these types of searches.