Confused by the display advertising landscape? You’re not alone. Columnist and Googler Brad Bender simplifies this complex topic and dives into the three components of programmatic buying that you should know. You’ve probably seen the Display Lumascape. This chart is the most frequently referenced visual I’ve ever seen from people describing the display advertising space. It categorizes the hundreds of ad tech companies in the ecosystem and how they relate to one another. Not for the faint of heart (or eyes). 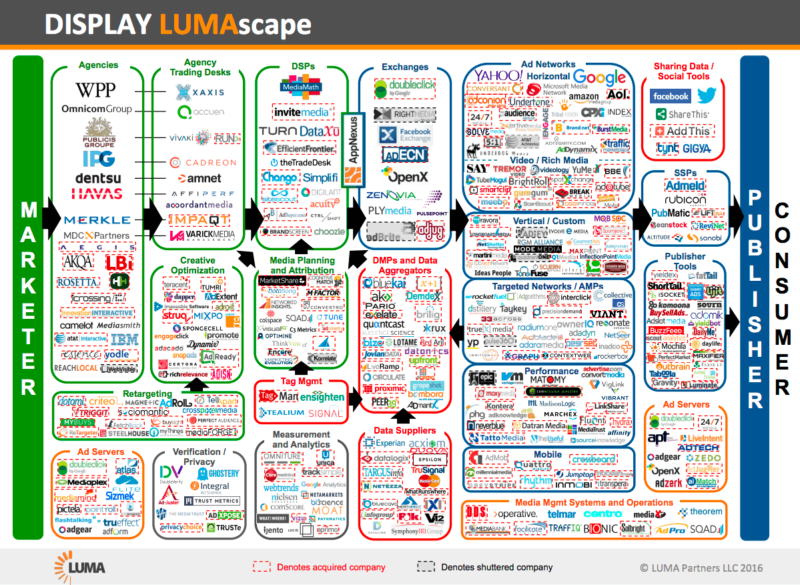 In my last post, I wrote a primer on programmatic to explain what it is and why it’s important. Check that one out first if you’re fuzzy on programmatic — then, everything here will make a lot more sense.

At Google, we have a few programmatic offerings, including the Google Display Network (GDN), the DoubleClick Bid Manager (DBM) and the DoubleClick AdExchange. I’ll be using those as examples, but this thought process can apply to any number of platforms in the market.

On each end of the display advertising landscape are the most important players: marketers, publishers and consumers. Without them, none of the ad tech matters. I consider the “starting lineup” the tools advertisers use to buy ad inventory: ad exchanges, ad networks and demand-side platforms (DSPs).

The internet seems to have ever-changing definitions for each, so let’s define each platform based on how they function today and what role they play in the programmatic world.

Ad exchanges are online marketplaces that help publishers make their inventory programmatically available to buyers (typically, ad networks or demand-side platforms) or sellers (typically Supply Side Platforms, or SSPs). The DoubleClick Ad Exchange is an example of an ad exchange.

Ad networks aggregate unsold ads from a range of publishers to sell to advertisers, including from ad exchanges. They make up the largest part of the display advertising landscape and are broken out into specialized areas like horizontals (wide reach and content), verticals, performance, mobile and more.

While advertisers used to have to buy impressions up front, some ad networks now offer programmatic capabilities. The Google Display Network is an example of an ad network.

For example, many DSPs have the ability to integrate first-party or third-party data to inform audience segments and bidding rules. The DoubleClick Bid Manager is an example of a DSP.

If buying and selling inventory is the main function of programmatic, what are all of the other tools you’ve heard about? There are companies that offer data management, creative optimization, ad verification, measurement, analytics and more. In my mind, these tools exist for more sophisticated advertisers who want more control levers and customization in their programmatic strategy.

But let’s take a step back. Have you ever been to one of those fancy burger places that give you the choice of ordering a customized burger versus what’s on the menu? You can go wild at these restaurants with things like chopped jalapeños, shaved truffles and fried ice cream. Don’t even get me started on the sauces.

This same thought process applies to the display world. Many display advertisers are happy with fully automated platforms that deliver efficient results without a lot of effort on their end.

On the Google Display Network, for example, you can use Google’s audience segments like in-market audiences or automated bidding technology and be off and running right away getting results.

Other display advertisers prefer the customization that DSPs can give and like to tailor attributes down to a granular level. So on DoubleClick Bid Manager, you can build custom audience segments based on your own data.  You can also integrate with third-party tools and bring in data from other sources, including Data management platforms (DMPs).

In reality, the lines that separate these categories are disappearing as many companies have started to offer a combination of tools. For example, many DSPs have integrated DMPs or built-in creative optimization services.

Instead of fitting neatly under one category, many platforms now fall under multiple categories. And many ad networks, like the Google Display Network, are now buying across multiple inventory sources.

Once you’ve built the foundation, you can consider additional tools, like data or creatives, which plug into the platform.

Don’t let the display ad tech landscape overwhelm you. While too many choices can feel paralyzing, they can also be empowering. Armed with the right knowledge, you can pick the starting point that makes the most sense for your business.

Brad Bender
Brad is responsible for global product management of Google’s display and video advertising business across the network and ad platforms. He is a frequent guest speaker at industry events and conferences globally and has been cited in Ad Age, Business Week, and The Wall Street Journal, among many other publications. In 2012 he was named a “40 under 40” leader by Crain’s New York Business. Prior to joining Google, Brad held multiple leadership positions at DoubleClick in both the U.S. and Europe. Brad graduated with a bachelor’s degree from Cornell University. He currently lives in Palo Alto with his wife, twin daughters and their dog.