Plus Apple's latest privacy move and its threat to email marketing.

MarTech’s daily brief features daily insights, news, tips, and essential bits of wisdom for today’s digital marketing leader. If you would like to read this before the rest of the internet does, sign up here to get it delivered to your inbox daily.

Good morning, Marketers, and Apple seems to be serious about this privacy thing.

And let’s say right off the bat, Apple can afford to be serious about it. Facebook and Google make money by selling ads. Apple makes money by selling hardware, software and services. It’s too easy to regard the tech giants as somehow interchangeable, but we are talking about some radically different business models.

This means Apple has nothing to lose by preventing the tracking of its users’ behavior by third parties. Just this morning, I woke up to the iOS 14.6 installed on my iPhone, and within minutes I was being asked whether I would permit individual apps to track my behavior across other apps. Answer: Generally no. I already made an exception for one app which has a good track record of showing me ads for products that really are relevant.

Now we learn that tracking email opens through the Apple Mail app is on the way out too. Ryan Phelan has some consoling thoughts for email marketers in the first story below.

Ryan Phelan, email marketing expert and MarTech contributor, says that the end of open tracking in the Apple email app will not be the end of email marketing — although it certainly signals some big changes. Apple will begin caching all images in emails sent to Apple devices. This caching will basically nullify the open tracking pixel. This may also affect real-time images as the image will not be “re-pulled” once cached for the user across devices.

Apple is doing this to stay ahead of privacy regulations that have not only swept most of the world but are increasing in popularity in statehouses across the U.S. “This is just another maturity level event that marketers will adapt to in their interpretation of intent,” he writes. “It could change or remove some functions that rely on open data to provide context. But the sky is not falling, email is not dying, and this is our chance to find better ways to measure customer intent.”

Ryan observes that open rates are poor indicators of intent. Clicks are much more closely linked to conversion. “Admittedly, we’ve loved the insight that pixels have provided,” he writes, “but we’ve gotten complacent. Marketers have been missing the boat on what true intent really is when it comes to email. The click is what’s important and what leads to conversion.”

The world is not ending for email marketing. “Yes, in writing this article, I did come to see that Apple’s move will have an effect, but it’s an evolution, not an end of life. This evolution is similar to what we went through with Google Tabs, image blocking and every other forced maturation of the channel.”

Google has agreed to work with the Competition and Markets Authority (CMA), a U.K. regulator, on their Privacy Sandbox. The CMA launched an investigation into Google’s FLoC in January of this year when advertisers voiced concerns about both the privacy and competition implications of Google eliminating third-party cookies in Chrome.

“The CMA was concerned that, without regulatory oversight and scrutiny, Google’s alternatives could be developed and implemented in ways that impede competition in digital advertising markets,” said the CMA website.

Google’s commitments. Google agreed, among other things, that it “will not discriminate against its rivals in favour of its own advertising and ad-tech businesses when designing or operating the alternatives to third-party cookies”; and further that it will “implement the proposals in a way that avoids distortions to competition and the imposition of unfair terms on Chrome users.”

Why we care. This represents a significant roadblock to Google’s apparent plan to allow only Floc-based advertising across its ecosystem. How much impact the U.K. commitments will have across territories remains to be seen, but that walls around this garden might not be built as easily as it seemed.

Don’t use your CDP to replicate MAP customer journeys

“Data is at the heart of everything, but we’re still struggling to handle it,” we wrote last month. And that article is still generating discussion and feedback on LinkedIn. MarTech contributor Scott Vaughan said:

“We could be headed down a dead end road…In talking with B2B marketing #cmos and #marketingops pros, CDPs are being thought of as the better (next?) version of marketing automation (MA) database with activation and segmentation capabilities being promised. We never could get there with MA. The challenge is most are taking the same actions with CDPs as MA systems – send email nurture, route to BDRs for followed up on ‘scored’ contacts.”

In other words, transferring the same old customer journeys from your MA system to your new CDP is not a smart way to drive value. Merkel SVP Adam Mincham concurred:

“Scott, I see a very interesting trend as B2B organizations actually start to onboard ‘CDP’s,’ in that they are using old approaches to deploy new tech. Put simply, we see people rebuilding journeys that they had in the MAP and that is counter-intuitive — my recommendation is, instead of replacing MAP journeys, experiment with new journeys and experiences, put some trust into the process and monitor what experiences work.”

The fundamental shift we’re seeing, said Mincham, is from linear (pre-defined) journeys to dynamic experiences. “These experiences are constructed in real time, by the machine. The marketers job is to train and to monitor.”

“We are hanging on so much legacy thinking when buyers and markets have changed,” replied Vaughan, “and, worse, thinking tech will solve/replace the need to evolve and adapt.”

Why we care. MarTech is not just about marketing technology. It’s about technology, sure, but also about how to drive value from that technology. Strategy comes first. A topic too little discussed in the space is the tendency to adopt new technologies, but use them to drive the same old customer journeys or run the same old campaigns.

Indeed, there are examples of innovative technologies — for example, those that use AI to trigger next-best-actions in real-time — which just might not be a good fit for marketing teams devising periodic campaigns to drive linear customer journeys. It’s one thing to adopt technology that can deliver engaging experiences rather than pre-defined campaigns; it’s another thing to conceive and create those experiences.

Expect a boom in mobile activity on Prime Day this year

Amazon’s blockbuster Prime Day promotions are officially confirmed for June 21 &amp; 22. Other top brands and retailers will be launching their own deals, and much of the activity will be through mobile. Consumers are expected to spend a combined one billion hours that week on their phones, according to mobile data and analytics provider App Annie.

Prime Day is Amazon’s largest sales event, eclipsing Black Friday and Cyber Monday. App Annie anticipates a 25% increase in time spent on mobile during this year’s promotions. The payoff is big for other brands if they time their deals around Prime Day. It can especially prove to be successful for newcomers that don’t have the clout of Amazon.

Last year, China-based fashion brand SHEIN became the fourth most downloaded app in the US during Prime Day, beating out Nike and Target during the same time. It still wasn’t a bad showing for Nike and Target, though, as they showed, respectively, 75% and 20% week-over-week download growth.

Here’s a look at the increase in time spent in shopping apps before and during the pandemic, which makes a compelling argument for why marketers in retail should take another look at their mobile presence. Even after Prime Week 2020, you’ll see that mobile use remained considerably higher than 2019. 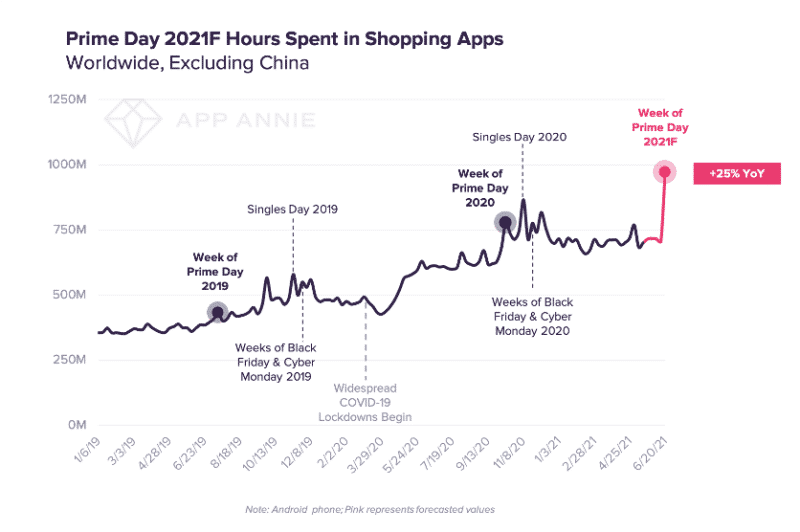 Why we care. Why we care. Prime Day, and the days before and after, are a bonanza for e-commerce. What’s more, it encourages traditional brick-and-mortars to up their digital game. Last year during the pandemic, everybody was buying online for obvious reasons. We even saw in the B2B space that consumers wanted to buy directly from distributors, forcing some companies to unexpectedly overhaul their e-commerce system.

Marketers are closely watching how much buying consumers are doing and where, especially through mobile devices. As the world opens back up, this means they will be able to engage customers even more through cross-channel real-world experiences, including by using digital out-of-home.

Quote of the day

“I’ve gotten emails this week from agencies we’ve turned down working with. The CEOs and founders of the firm ask why. It’s simple: I will not work with an agency that doesn’t have a diverse team. It’s a non-negotiable for me. It’s still surprising to me when I show up to a pitch and this is the case. Just a PSA for anyone who wants to work with us.” Maya Watson, Head of Global Marketing, Clubhouse