Yesterday, Google announced that it had 400 million people who had “upgraded” to Google+, a statistic we’ve had updated over time. But many have wanted to know how many people actually use Google+ itself, not just have accounts enabled for it. That’s finally been revealed: 100 million. Below, a guide to how this figure fits […]

Yesterday, Google announced that it had 400 million people who had “upgraded” to Google+, a statistic we’ve had updated over time. But many have wanted to know how many people actually use Google+ itself, not just have accounts enabled for it. That’s finally been revealed: 100 million. Below, a guide to how this figure fits in with past ones Google has given.

Both figures were in a Google+ post from Vic Gundotra, Senior Vice President, Engineering at Google:

This week we also hit an important milestone–over 400,000,000 people have upgraded to Google+. It was only a year ago that we opened public sign-up, and we couldn’t have imagined that so many people would join in just 12 months.

While Google+ is all about creating a better experience across Google, it’s also a destination. And here too, I’m happy to report that we have just crossed 100,000,000 monthly active users on Google+ (plus.google.com and mobile app).

Let’s start with the first figure, the 400 million accounts. Number of Google+ capable accounts has been a standard metric that Google has provided been displayed since public launch of Google+.

To help show what this means from an account growth standpoint, we’ve compiled the following graph of all publicly released Google+ account milestones: Overall, yesterday’s account milestone number was a big jump from the numbers released just two months ago. From the last update at Google I/O in July, Google+ has seen a 60% increase up from 250 million accounts to 400 million accounts.

It should also be noted that in late January 2012, Google required new accounts to sign-up for a Google+ enabled account — something that likely contributed to this year’s growth.

In February, an “active monthly user” milestone was released for the first time that covered all Google+ users that touched data across the web. The number released was 100 million active monthly users. This included anyone with a Google+ account that made a Google+ action anywhere on the web. This means that a user +1’ing a mobile app, using Circles in Gmail, or +1’ing a web page would count towards this number.

In July at Google I/O, we got an update on this figure, which rose to 150 million active monthly users. There’s not been a further update, so here’s the chart of what we know so far: 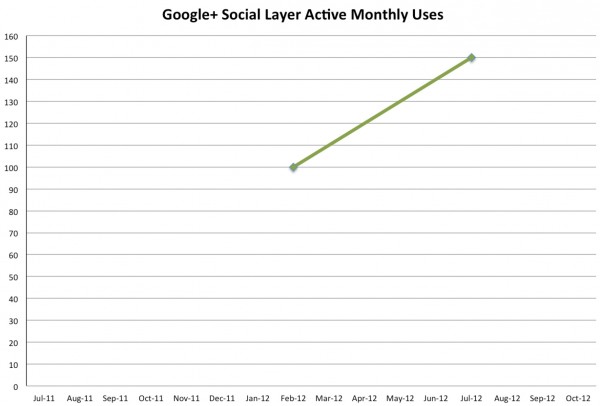 Remember, the figure above is for what we could call “social layer” usage. That’s different than what comes next, about usage on the actual Google+ social network.

While the metric released in July was impressive, many people wanted more granular data on usage of the network. The “social layer” figure includes many users who may not actually use Google+ itself as a social network.

Yesterday, Google finally released a milestone of 100 million active monthly social network users who either visited plus.google.com or used the mobile app. This is the first time that this metric has ever been released to the public. This metric clearly shows that many users are actively interacting with the Google+ social network, not just the various buttons & Google+ functionality found on other sites. It also shows a somewhat low engagement of the social network itself as only 25% of Google+ accounts are using the service as a social network.

So, you’ve now seen all the historical monthly usage data — how does yesterday’s milestone stack up to previous numbers? The answer is that it doesn’t. The active social network usage is a different metric from the two other metrics (registered accounts; social layer users) released before. It’s apples and oranges.

When the 100 million active monthly users data came out, many folks (including myself) saw this as a 33% drop from July’s 150 million number. In reality the “active monthly user” numbers are very different in everything except their title and simply cannot be compared. While the data is interesting, it is impossible to tell if there has been an increase or decrease in Google+ active monthly usage.

Is this helpful? Yes. Is this annoying? Also, yes.

While we can’t draw any comparison conclusions from this data, it is nice to see that Google is opening up specific data specifically for social network usage. Here’s to hoping the next milestone gives us something to compare to.