You’re trying to find a journalist to pitch. Muck Rack has been a standout service in that regard. Now it’s added a feature that it hopes will make finding the right journalist who has broad reach even easier, a way to sort using Google’s PageRank score of web site quality. What Is PageRank? PageRank, in […]

You’re trying to find a journalist to pitch. Muck Rack has been a standout service in that regard. Now it’s added a feature that it hopes will make finding the right journalist who has broad reach even easier, a way to sort using Google’s PageRank score of web site quality.

PageRank, in how it’s most commonly used by consumers, is Google’s system of identifying how important it considers sites to be, on a scale of 0 to 10, with 10 being best. Do consumers really see these scores? They’re only offered to those using Internet Explorer with the Google Toolbar, but Google recently said that consumers do make use of them this way.

Muck Rack’s new feature leverages PageRank for something else, as a way of ranking journalists. While you might think ranking them by social “influence” such as number of Facebook or Twitter followers, or something like Klout scores, would make a more compelling metric, that doesn’t capture how important their publications are, the service says.

Gregory Galant, CEO of Sawhorse Media — which produces Muck Rack — emailed me on this point:

This is key since often a journalist might only have a few hundred followers, but write for a publication like the New York Times (PageRank 9). Sorting a search by followers or Klout would miss these journalists, but Muck Rack makes them easy to find.

Curious, I did a search for “NSA” on Muck Rack where, by default, I got “Most Relevant” results back (note the option at the top of the results, where you can also select “Most Recent” or the new “Pagerank” option): None of the journalists listed seemed to have any particular expertise about the NSA. They’re appearing simply because they’ve recently tweeted or retweeted something about the NSA. Can using the new PageRank sorting feature improve that? Let’s see: 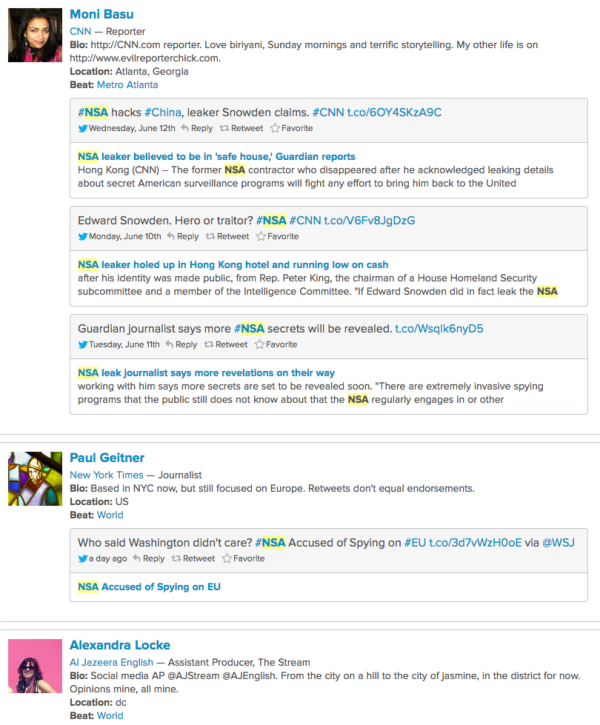 It didn’t really make a difference. Nor did editing the search so that I was just searching for “NSA” within the names and bios on record, as opposed to through tweets and articles. When I did that, I got one match, a Sports Illustrated writer.

What I really wanted Muck Rack to do was find and highly-rank Glenn Greenwald, because when it comes to the NSA, the Guardian columnist and blogger is one of the leading journalists out there. He is listed with Muck Rack, so it was disappointing he didn’t come up: Hopefully, the feature will improve going forward. Meanwhile, searching may still find some useful journalists, and you can always browse by beat: There, you can get rankings by Twitter followers, as well as “most active” journalists.