Everything PPC Advertisers Want To Know About LinkedIn Ads – Part 2

Contributor Sahil Jain shares more questions and answers about how best to utilize the platform. Don't miss these important tips on bidding, targeting and choosing between ad products. In Part 1 of this series, I shared questions and answers about targeting and creative on LinkedIn. Those questions came from the attendees at one of our recent LinkedIn educational events. After that event, we received feedback that there wasn’t enough time, and there were more unanswered questions.

Today, I’m sharing just a few of the questions from the event, and I’m including answers from expert LinkedIn advertisers who weighed in.

Q: Should everyone be using the Audience Expansion targeting feature in LinkedIn?

A: Audience Expansion is really good if you don’t have a lot of time. Let’s say you’re tasked with running all of digital marketing for a company, and you create one LinkedIn campaign as a test. When you notice it’s performing really well, you may decide to create another.

However, it takes time to create new campaigns, and when you’re juggling all the other digital marketing channels, Audience Expansion makes it easy for you to get more reach from your existing campaign instead of creating a brand-new one.

You can simply check a box in LinkedIn Ads, and your ads will be shown to an additional segment of people who are related to the audience you want to target but doesn’t exactly fit inside of it.

On the other hand, I do know advertisers that don’t use it very often because they live inside the platform and really want their data to be clean.

The disadvantage of Audience Expansion is that you won’t know to whom LinkedIn is expanding your reach. It could be users with similar job titles, or maybe with related skills. With Audience Expansion, you have no control over that, so it’s generally a very good feature for an advertiser that doesn’t have as much time to spend on the platform.

Q: Does LinkedIn offer retargeting, or is there another solution that you recommend?

A: From a self-service perspective, LinkedIn does not offer retargeting. If you are running LinkedIn campaigns and paying roughly $5 to $7 per click for that traffic, it is definitely a best practice to have a retargeting pixel on your site so you can retarget anyone who doesn’t convert. You can use a number of retargeting networks to do this, like Google AdWords remarketing, AdRoll and/or ReTargeter, for example.

If you’re spending enough to qualify for the managed services side of LinkedIn, also known as LinkedIn Marketing Solutions (LMS), the LinkedIn Lead Accelerator is included as part of the LMS offering.

This retargeting technology was what LinkedIn acquired with the Bizo acquisition (and later rebranded and relaunched), and it’s likely out of reach of smaller advertisers. However, if you’re able to utilize it, it allows you to run Sponsored Updates when a user is in the buying process. That’s especially cool because there really aren’t any other third-party retargeting tools that can do this.

Q: When dealing with relatively large audience sizes of > 300K, we’ve seen clicks and CTR remain consistently good, but over time our actual conversions of leads will steadily decrease. Do you know why?

A: It’s hard to say the exact cause, but we’ve actually seen the same thing occur. If you have the resources to do so, redesigning the landing page will make the biggest difference in getting your conversions back up.

Q: Which ads are more successful for conversions: Sponsored Updates or Text Ads?

A: We haven’t seen a huge difference in conversion rates between the two, but we have seen that there are certain offers that work better than others for these ad formats.

For instance, promoting content on a Sponsored Update performs tremendously for lead generation, but for Text Ads, we’ve seen CTRs actually decline when promoting content. So it can totally be dependent on the offer, but we’ve actually seen pretty close parity in conversion rates between the two. In looking at advertisers in various verticals, we’ve seen that these two products end up costing around the same amount on a cost-per-click basis for any given advertiser. So if you have a limited budget and are deciding which creative to run, I’d recommend Sponsored Updates because we typically see a 10x higher CTR over Text Ads, and these units take up a lot more real estate on LinkedIn. You undeniably get more fields and a bigger image with Sponsored Updates — for a similar cost per click.

Q: Do you know how LinkedIn decides when to serve Sponsored Update images as “full screen?” Is there a secret sauce for getting the ad to take up more real estate?

A: With Sponsored Updates, you can either run a content update or an image update, and the only real difference is whether you’re bringing in a piece of content or the URL of an image. With the latter, you will get the larger image size and take up more real estate. However, because you’re choosing an image, you’re losing some elements that would come with a content update, such as a headline and description. With the image update, you are only allowed an intro. We’ve heard from several marketers who are really making this work in their favor. You can optimize this by bringing in a larger image and including a link to your landing page in the intro. This can be very effective for things like infographics.

If you’re just bringing in normal content, the way the user views the content will make all the difference. If it’s viewed from the desktop, your image will be 180 pixels wide, which isn’t a whole lot of real estate. If the same ad is viewed on a tablet, however, it may be 1200 pixels wide.

So the image size will vary by device and by type of Sponsored Update. We highly encourage you to test all of the above, as different audiences will react differently to your creative.

Q: Which text field is more important for CTR and conversion rate, the intro text or the description text?

A: We recommend that you continue to perform tests using variations of these to see which is most impactful, but based on our experience, we’ve seen the most variance when testing the intro field.

With a simple A/B test of one or the other field, you can see the impact your ad text has on conversion rate. If, in your testing of the description text, you see the most variance in performance between test versions, you can conclude that description is the most important for your situation. Alternatively, if varying the intro text has the most profound impact, you can put more emphasis on that field. 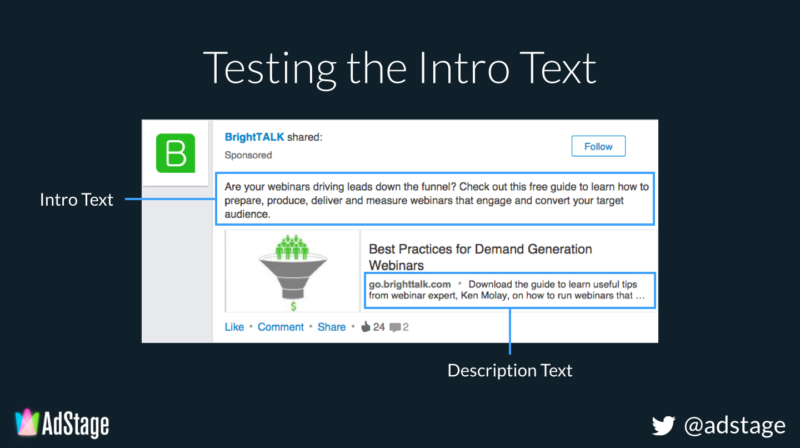 It’s important to note that the description text is actually only displayed on the desktop. If 60% of your LinkedIn Sponsored Update impressions are served on desktop computers, that means a full 40% of impressions served (those that appear on mobile devices) won’t include the description.

The only two fields that will consistently be shown on all devices are your intro and headline, so adding a call to action in the description may not be necessary.

Q: Does LinkedIn allow you to post videos in the image section instead of an image?

A: It doesn’t, but a nifty workaround would be to post an image that has a superimposed play button. That way it looks like a play button for video, but when someone clicks through, you just load the landing page and autoplay the video there.

I assume that videos ads are something that LinkedIn has considered and is continuing to consider, but for right now, you have to be a little hacky to achieve this result.

A: When switching to CPM bidding, if you’re not bidding high enough, your ad may not be in the first Sponsored Update slot in LinkedIn’s feed. This means your ad could have been pushed down so far as to be the tenth item in the feed.

These are just a few of the top questions we received about targeting, creative optimization and bidding on LinkedIn. Our next LinkedIn event will cover how to optimize your LinkedIn campaigns at scale and tips to stay organized with hundreds of campaigns. If you have any questions of your own, add them in the comments here.

Sahil Jain
Sahil Jain is the CEO of AdStage, the leading cross-network online advertising platform. Previously he dropped out of High School to be an Engineer at Yahoo!, left UC Berkeley to join Corp Dev at AOL and co-founded YC backed Trigger.io.