As widely anticipated Facebook filed its S-1 to go public today, and interesting fact emerged. Facebook — out of necessity — will soon become the largest mobile ad network in the world. Throughout the S-1 Facebook makes reference to mobile. It sees mobile as both a threat and essential to its future growth. (Last year I […] As widely anticipated Facebook filed its S-1 to go public today, and interesting fact emerged. Facebook — out of necessity — will soon become the largest mobile ad network in the world.

Throughout the S-1 Facebook makes reference to mobile. It sees mobile as both a threat and essential to its future growth. (Last year I argued that Facebook would be the largest mobile ad network in the US if it had mobile ad units.)

Mobile MAUs. We define a mobile MAU as a user who accessed Facebook via a mobile app or via mobile-optimized versions of our website such as m.facebook.com, whether on a mobile phone or tablet such as the iPad, during the period of measurement.

In May of last year, according to an analysis by Hubspot, about a third of of Facebook’s traffic was coming from mobile. That figure is probably higher now. It would also be interesting to know how much of the time spent on Facebook today is via mobile, which dwarfs time spent with other mobile sites. 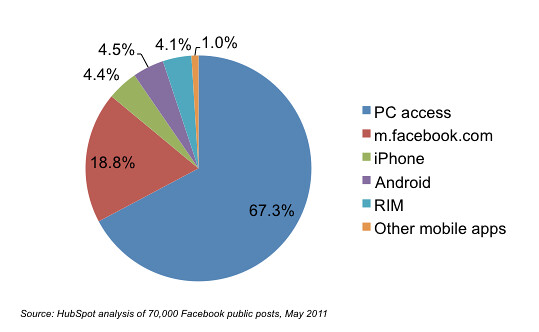 Among the standard provisions of S-1 filings is a lengthy list of “risk factors” that warn people that the investment being considered could lose value if market or competitive conditions change. Mobile is cited prominently among those risk factors. Facebook says that it expects mobile access will constitute an increasing portion of the time spent among its users.

This language is highly suggestive that mobile ads are on the company’s roadmap. Indeed, the intention to introduce mobile advertising has all but been confirmed by earlier press reports.

I did some “back of the envelope math” (last year) and calculated that Facebook’s current mobile page views would be worth about $2.5 billion if fully monetized. That’s comparable to the mobile ads “run rate” that Google announced last year.

In one section of the S-1 devoted to mobile advertising Facebook says, “We currently do not show ads or directly generate any meaningful revenue from users accessing Facebook through our mobile products, but we believe that we may have potential future monetization opportunities such as the inclusion of sponsored stories in users’ mobile News Feeds.” (Emphasis added.)

While that’s not a guarantee we’ll see sponsored stories in mobile users’ feeds, it’s guarantee that we’ll see mobile ads from Facebook. As an aside, Facebook could also distribute its ads to third party apps or mobile sites (e.g., the Facebook Display Network). We may see the company develop an ad network as part of a broader revenue growth strategy for both PC and mobile.

We’ve been hearing about a “Facebook phone” for a couple of years. The rumor and speculation are that Facebook would “pull a Kindle” and take Android and then build a highly customized UI on top with a hardware partner. The idea is tantalizing and further suggested by Facebook’s apparent nervousness about its lack of control over mobile distribution:

There is no guarantee that popular mobile devices will continue to feature Facebook, or that mobile device users will continue to use Facebook rather than competing products. We are dependent on the interoperability of Facebook with popular mobile operating systems that we do not control, such as Android and iOS, and any changes in such systems that degrade our products’ functionality or give preferential treatment to competitive products could adversely affect Facebook usage on mobile devices.

Yet any such proprietary device would stand about a 50-50 chance of success — if that. I say this because there are already a few phones in the market that seek to use heightened Facebook integration as a differentiator. Yet they’re either only modest successes or outright failures: the HTC ChaCha and Status and INQ’s “Social Mobiles.”

We don’t know what Facebook’s own efforts would look like however. In addition, the success of Kindle Fire does provide a model for a Facebook phone in several ways.

Facebook’s recent integration of apps into Timeline on the PC also makes the company a potentially potent mobile ecosystem “platform” on its own. One might imagine an “fPhone” with an Android-based app store much like Amazon’s appstore.

I remain skeptical about the outlook for a proprietary Facebook phone, however, unless there were some additional angle such as free calling to all your Facebook friends.

Facebook has both a defensive and offensive view of mobile and regards it as a critical source of potential revenue and growth. Indeed, the migration of usage from PC to mobile means that Facebook will be “forced” to introduce ads into its mobile properties. The allusion to “sponsored stories in mobile users’ news feeds” also suggests that the company is not merely trying to monetize its massive mobile audience but to do so in a thoughtful way that won’t compromise the user experience.