According to Nielsen data, Gen-Z is now 26 percent of the population. According to Nielsen’s new Total Audience report, millennials and Gen-Z now comprise 48 percent of the total media audience. Gen-Z in particular is now the single largest audience segment at 26 percent (although there’s a vast age range).

Because members of Gen-Z are different in key ways from millennials, the demographic shift holds some implications for brands and retail marketers. Gen-Z is defined as those born between 1997 and 2015. The oldest members of the generation are now 20. The oldest millennials are now 37. 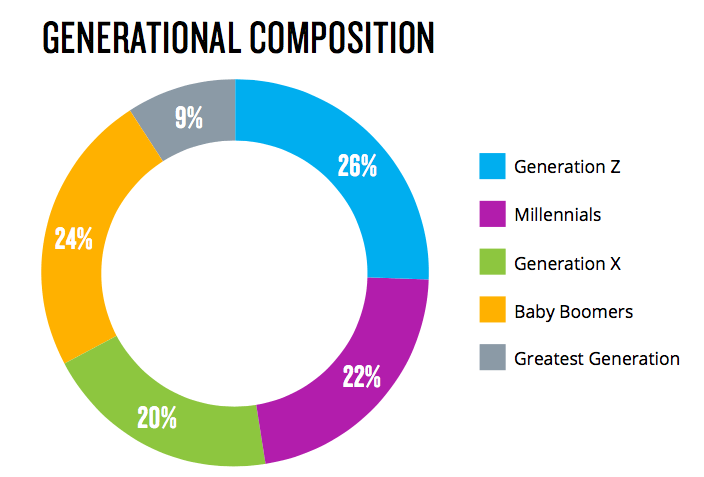 While members of Gen-Z look like millennials from an overall device ownership perspective, there are a few key differences. According to Nielsen, they watch less conventional and DVR-based TV than earlier generations. They also spend far less time accessing the internet via PCs than older groups.

Millennials and Baby Boomers spent on average 1:02 hours accessing the internet over a PC on a daily basis in the first quarter of 2017. Gen X spent about 1:20, according to the report. By contrast, Gen-Z spent eight minutes per day online via PC. The vast majority of their online time is spent on mobile devices.

How Gen-Z prefers to make purchases Members of Gen-Z are more likely to buy in stores than millennials and prefer it to e-commerce, according to multiple studies. However, technology heavily influences those mostly in-store purchase behaviors.

According to a Euclid Analytics consumer retail behavior survey, Gen-Z uses mobile apps and features on mobile phones more than other demographic segments in retail stores. Texting and Snapchat in particular are much more heavily used:

The use of Snapchat is the most dramatic difference between Gen Z and other groups. More than 40% of Gen Z respondents say they use Snapchat in a store, compared to only 15% of other respondents. Texting remains the most popular activity overall, especially with Gen Z. Half the Gen Z respondents say they text while in a store, compared to 39% of other respondents. The only mobile feature Generation Z uses less than other groups is Google search.

Which mobile apps / features do you use the most while shopping in a retail store? Gen-Z is the next generation of mass-market consumers. While they share some of the behavior patterns and characteristics of millennials, they have distinct preferences and expectations that brands and retailers must understand and address.