Real Story on MarTech: Why are vendor marketplaces so fragmented?

Six reasons why consolidation not been the norm in the world of marketing technology?

When I started as an industry analyst 20 years ago covering the web content and experience management (WCM) market, I marveled at the plethora and diversity of vendor start-ups. Well, some elder analysts clapped my shoulders and intoned, “Yeah, but how many will be around in five years? The market will consolidate, so you need to pick winners.” No doubt they were extrapolating from their experience with other industries — notably ERP, but maybe CRM too — where vendor oligopolies did emerge.

Yet, the story of the WCM market, and the marketing tech space more generally, is that consolidation by and large has not happened. If you follow the progression of Scott Brinker’s famous logo chart you’ll note not just the expansion of categories, but also the almost vertigo-inducing number of logos within each particular box. What’s going on? And how should you the enterprise marketing tech leader respond to a world of highly fragmented marketplaces?

I can think of at least six reasons why “industry consolidation” has been less the norm in the martech world.

When it comes to generating the right prospect and customer experiences, customer needs vary from quite simple to devilishly complicated. This means vendors can target a wide range of capabilities, ambitions, and budgets, yet it’s hard to address those variations from a single codebase. Especially as markets mature, vendors tend to differentiate on a complexity spectrum, from toolkits on one end to highly packaged products on the other. Consider the now twenty-five year-old WCM marketplace, where at least 30 major players (plus many more less-known) compete successfully for business. 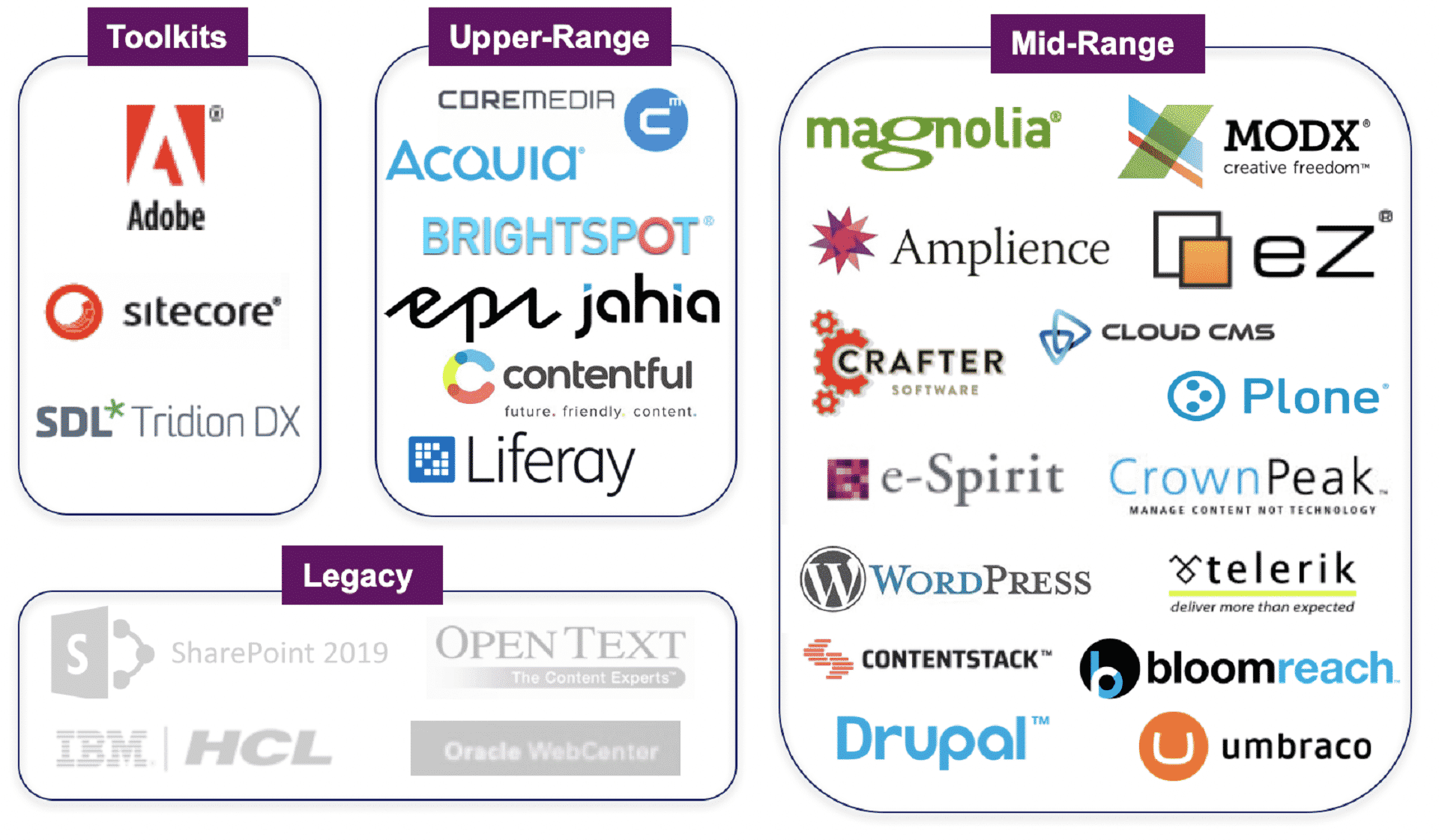 So, different strokes for different folks. Note that sometimes the same vendor will try to sell alternative products for multiple tiers. This routinely fails, mostly because there are too few synergies across the technology, sales, and delivery models.

One way that certain tech marketplaces can consolidate is via “roll-ups,” where vendors acquire competing platforms to create greater marketshare. It almost never works. The technologies never blend together right, and the level of effort for a customer to switch platforms always proves so high that a smart enterprise just goes back to shopping on the street for a new vendor.

To be sure, sometime a tool gets bought and then put down (like when Episerver acquired Ektron), but that’s still pretty rare. Of course, there’s M&A going on; that same Episerver acquired personalization vendor Optimizely (and took its name). But mergers and acquisitions almost never lead to products going away — they just change owners.

It’s not hard to build the bare bones of an email marketing platform—and many other marketing tech solutions. Cloud-based technology is easier to build and deploy, and the world is awash in loan offers and investor funding.

Of course, building true software and a winning distribution model takes time, and you should always remain alert for “consultingware,” bespoke technology solutions masquerading as real platforms, which end up sucking up major consulting resources to operate. Still, there are a lot of small yet viable players out there, with more each year. Many of these are regional players, who also take advantage of localized compliance with increasingly disparate data privacy requirements.

In the era of cloud, it’s harder for vendors to die. Among other reasons, cloud-based delivery models allow vendors to marginalize many of their expenses. This isn’t always a great thing. You might license a platform that becomes undead or even a zombie, but very few actually die outright in medieval-style competition.

For sure it’s fun to speculate what, say, the Customer Data Platform (CDP) marketplace would like if it were a kind of Game of Thrones.

Some marketing tech offerings do die, but in the real world they’re not killing each other with Westerosi abandon. The CDP market will see most players still happily alive at the end of its current run.

5. The biggest vendors have failed to dominate

The biggest software vendors in the marketing tech world have failed to dominate this space in way that crowds out substantial competition from best-of-breed alternatives. SAP and Oracle entered this domain largely via acquisition, and their offerings feel like appendages. Microsoft perceives marketing as an add-on to its core stake in Dynamics CRM. Adobe and Salesforce have tried to dominate large enterprise stacks, but have mostly failed to conquer hearts and minds amid growing concerns about technical debt, cross-platfom incompatibility, hidden costs, and also: Bullying. IBM famously exited in 2018 and 2019.

Most of you probably license at least one martech platform from one of the vendors above. In many cases they serve as “anchors” in your “martech mall.” But with each passing year, the case erodes for any of them to dominate your marketing tech stack in the way SAP may dominate your finance tech stack. 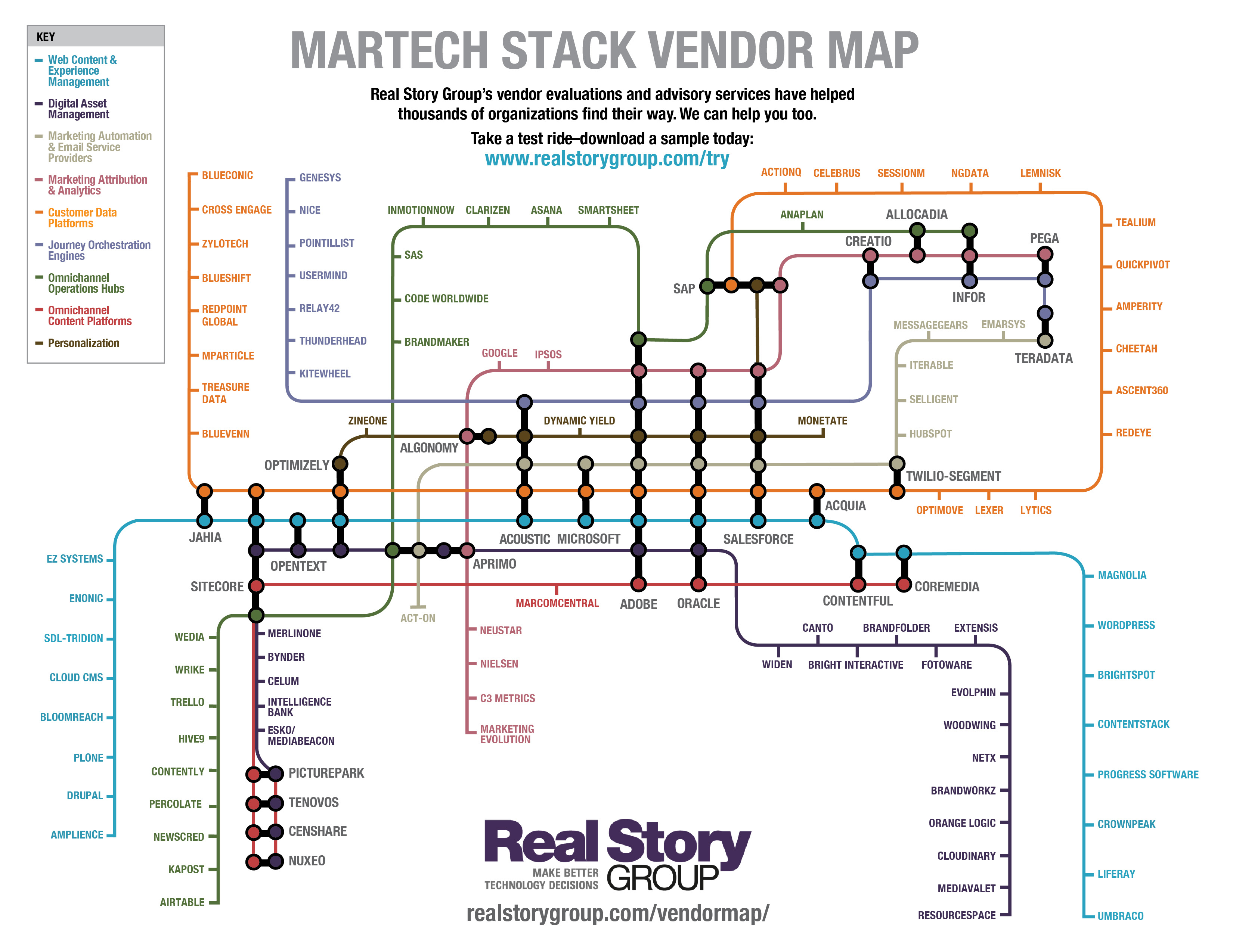 Among the vendors RSG evaluates, there’s a “city center” of major players, but also a vigorous periphery of specialized vendors, some just plugging along, but most innovating rapidly.

This last one is not a happy story. It’s not easy to switch platforms, and that keeps many systems plugging along. Some of the 160 vendors that RSG evaluates are not growing at all, but they keep their customers happy enough. Barring a mad rush to the exits, the vendor can remain undead by recouping ever-beloved “maintenance and support” income streams.

You have lots of marketing technology choices, and choice is good. There’s always a temptation to short-cut your decision-making, but a smart enterprise will cast a wide net initially, and remain intentional about the tools they select to support marketing transformation.

As your assess your vendor alternatives, you should give increasing weight to architectural fit in particular. I strongly believe the stack of the 2020s will differ substantially from that of the past decade. Along the way, the best-fit platform may not be the biggest-name platform.

Real Story on MarTech is presented through a partnership between MarTech and Real Story Group, a vendor-agnostic research and advisory organization that helps enterprises make better marketing technology stack and platform selection decisions.