Facebook News Feed Survey Asks Users: How Many Ads Are Too Many Ads? [Screenshots]

It’s no secret that Facebook is heavily focused on improving the content of its News Feed. The company has made a number of recent announcements around the News Feed, not to mention that it’s running several tests, too. When Facebook recently announced its focus on high-quality content in the News Feed, the explanation of that […] It’s no secret that Facebook is heavily focused on improving the content of its News Feed. The company has made a number of recent announcements around the News Feed, not to mention that it’s running several tests, too.

When Facebook recently announced its focus on high-quality content in the News Feed, the explanation of that new algorithm mentioned that it started with user surveys: (emphasis added)

What’s in these surveys that Facebook does to help it decide what to show in the News Feed? One of our Third Door Media staffers was invited to complete a News Feed survey on Monday, and the full set of questions is shown below.

This survey asked questions that were primarily about advertiser and brand content in the News Feed — with an apparent focus on how much is too much. If you’re a brand or marketer that’s active on Facebook, seeing how Facebook tries to gauge user interest in News Feed content can offer valuable insight to guide your own efforts there.

The survey begins with four very general questions, asking the user for overall feedback on Facebook itself, then moving on to ask about News Feed satisfaction, how interesting News Feed content is and overall satisfaction with News Feeds ads. From there, the survey gets more specific in asking the user to describe his/her News Feed. One screen presents 13 adjectives — from “entertaining” and “addictive” to “repetitive” and “boring.” Also included in the list of adjectives are advertiser-related terms such as “corporate” and “commercial.” 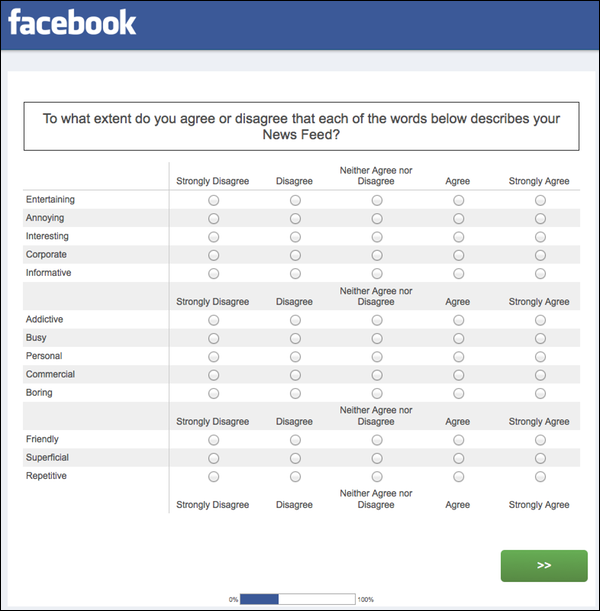 That’s followed by another screen asking the user to agree or disagree with 13 statements about the News Feed, but most of these are ad-related. Statements include

That’s just three of the commercially-oriented statements on this page, where Facebook is trying to gauge its users’ appetite for content — ads or otherwise — from companies. After those 13 statements, the survey asks users to prioritize five reasons s/he uses Facebook, with options including connecting with family, keeping current about news/information and learning about brands. The final two questions ask about the different types of content that appears in Facebook’s News Feed — content from friends/family, companies, celebrities and groups. On one screen, Facebook asks the user how much of those content types used to show in News Feed, how much shows now and how much the user wishes would show (first screenshot below).

After that, the final question asks the user how “commercial” Facebook feels compared to other sites (second screenshot below). After that, there’s one last screen where Facebook invites the user to provide “any additional feedback you may have about ads in News Feed.”

It’s pretty clear from this set of questions that Facebook is wondering how far it can go in putting ads and commercial content in News Feed without negatively impacting the user experience. There’s a fine line Facebook has to toe in keeping News Feed relevant and enjoyable for users so that they’ll continue to return time and time again … while also making enough space for advertisers and brands to get their messages in the News Feed, too, so that they’ll continue to open their wallets and spend more of their social ad budget with Facebook.

We don’t know, of course, how many other surveys Facebook is running and how many others might also address ad-related content in the News Feed. It seems safe to assume that this isn’t the only one.

In any case, Facebook says it has used these surveys to begin researching potential News Feed changes, so knowing what’s in even one can be valuable for brands and marketers as they navigate Facebook’s ever-changing waters and prepare for News Feed changes before they happen.