The Unilever brand's marketing grows up, celebrating men's confidence in business as it has previously extolled their confidence with women.

Eschewing its frat-boy origins and recognizing that men take professional success very seriously, Axe has launched a Canada-centric online video campaign which highlights three #Selfmaker men who have chosen to abandon traditional paths to success and forge their own.

The three men highlighted in the video series are former banker Charles Bierbrier, who launched a brewery; accountant Tomas Romita, who decided he’d rather start a clothing brand; and DJs Tom Wrecks and Pat Drastik, who formed Thugli.

In each video, created by Sid Lee, the men recount their discontent with their paths in life and how they reached their self-described “f*** it” point and decided to make a change.

An anthem video combines all three for an over-arching brand story:

Besides YouTube, the videos and other campaign imagery are housed on a Tumblr site. Of the campaign’s shift away from the silliness of girls chasing boys who wear Axe to a direction which celebrates confidence and self-made success, Axe Canada marketing Director Jessica Grigoriou told Strategy’s Josh Kolm in an interview:[blockquote]“We’ve always been a brand rooted in confidence, but we are evolving as guys are evolving. We are thinking about guys’ full life mentality, and that includes things beyond just getting the girl. We know that appeals to a large demographic of guys, so this campaign will be aspirational for a younger demographic that is beginning to think about what their own path might look like, or maybe a guy who has already started down that path and has the confidence to follow what he is passionate about.”[/blockquote] 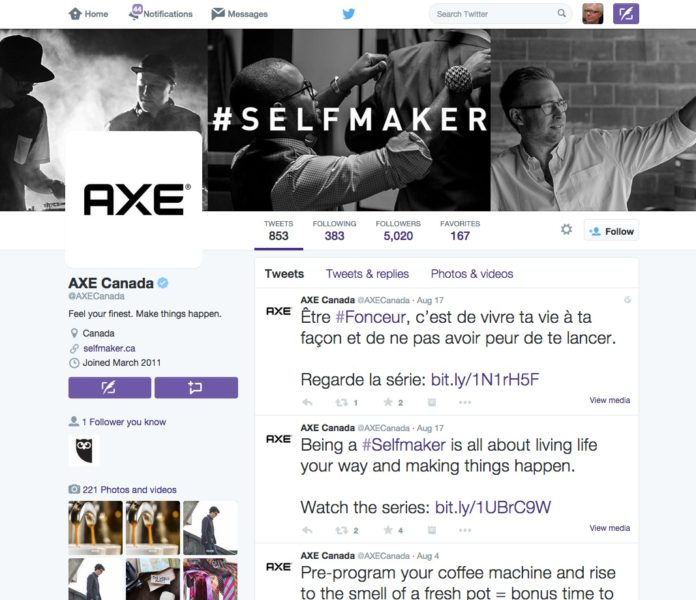 Being a #Selfmaker is all about living life your way and making things happen. Watch the series: http://t.co/4HNKk0DueB

Being a #Selfmaker is all about living life your way and making things happen. Watch the series: http://t.co/qdWoheoIYa The brand, working with Harbinger, is giving the campaign legs with an influencer outreach program. In addition to that, Mindshare is handling a paid media program.